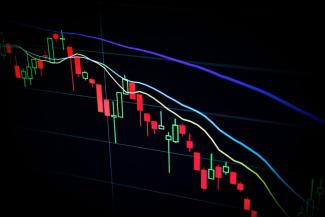 Two pieces today, one on general retirement planning thoughts and one on our current market:

1)  You may have noticed in our discussions and meetings I spend next to no time comparing your assets to my other clients or even usually giving you a sense of where you stand vs. the masses saving for retirement.  The reality is the average person is in serious trouble if they think they are going to be able to retire in a financially healthy way at or by age 65.  The earlier I can work with someone in their journey, the better I generally feel about the prospects of a client being able to reach their personal version of financial freedom.  But employees on average contribute 7.3% of their income towards 401k - this number should be at least 10% and probably more like 15%+ for long-term success- and both the median ($35,345) and mean ($141,542) 401k balances across all ages are ridiculously low.  If one went to retire on $141,542 I do not know of a way to generate more than about $10,000 per year in income, and even that would severely risk running out of funds during retirement.  Social Security plus $10,000 per year total is not a happy, healthy financial retirement - you might stay on the planet, but you would not be having any fun.  Everybody’s spending habits, wants, and needs are different, so there is no magic number I can provide.  But just understand that the AVERAGE person is in trouble, so comparing yourself to your peers is not a fruitful exercise.  We are a consumption-based society.  Airplanes and restaurants are swamped with people.  Credit card balances remain robust, and retirement is a fantasy-land for many full-time workers based on their personal choices, not their lack of income or opportunity to save and invest.

2)  As I write this post the S&P 500 stands at 4,013 (11:52 AM 9/2/2022).  The index has just been bouncing around over the past few months.  It remains to be seen if 4,070 is a meaningful level of support as it had been a few months ago - we did not bounce at all the last time we hit that level so it is probably meaningless now.  We were at this level on July 27, 2022, and on May 26, 2022, and we were only 4% above this level on March 14, 2022.  The reality is that the beginning of the year was terrible, and we have yet to recover those losses, but we are not substantively below that level attained after 11 weeks of losses to begin 2022.  The Federal Reserve has been extremely aggressive in increasing the Federal Funds Rate.  The major reason for this is to reduce the persistent inflationary forces we all see and feel these days.  On that item they will likely be successful, and they have the “cover” of a relatively strong employment picture to allow them to be aggressive in their tightening measures.  But I have mentioned to clients I thought inflation might go from 9%+ to perhaps 5% and the Federal Reserve would tacitly be ok with this versus their stated goal to bring inflation back to the 2% annualized range.  Fed Chairman Jerome Powell squashed those thoughts/hopes in this speech a week ago.  Essentially he said the 2% target is very much still his target and anybody who thinks the Fed is close to done with their tightening cycle/increasing the Fed Funds rate is incorrect.

Markets sold off markedly in the subsequent days, as stocks prefer lower interest rates to higher ones, even though paradoxically they want the Federal Reserve to do its job and be tough on inflation.  So the Fed is in the tough place of raising interest rates into a probably-slowing economy.  You may have hard of a “hard landing” for the economy: what that means is the Fed increases interest rates too much, too fast, leading to an economic recession.  Finance and economics are my academic background and certainly intertwined into the movements of the markets, but I am far more focused on the latter.  I remain hopeful the market can improve in the coming quarters, but I recognize there will be fits and starts and we are not likely headed in a straight line up.  Almost every investable asset class is down on the year-to-date, so patience is the name of the game today.  There is just not a lot of “gee I wish I had owned XYZ investment 8 months back” - call it “FOMO” or Fear of Missing Out - as the vast majority of things have lost money in 2022.  This is not normal, and it will pass.  As Chuck used to end our newsletters, “keep the faith, faith is the spirit.”